This page is to give advice and guidance to patients on how to manage their long-term conditions, how to deal with minor injury and illness that doesn't require treatment from a clinician and give patients advice on several topics.

If you still have concerns you can go through e Consult for futher advice, just go to the home page and click on eConsult and follow the prompts.

Improve your knowledge, monitor your COPD sounds interesting then complete the form with your email details and we will send you information in the form of MyCOPD app for you to download.

Further support around Domestic Abuse and Covid 19 can be found here https://my.northtyneside.gov.uk/category/641/domestic-abuse

Domestic Violence " You Are Not Alone" Campaign

The Home Secretary launched a new public awareness raising campaign highlighting that if anyone is at risk of, or experiencing domestic abuse, help is still available.

The campaign, under the hashtag #YouAreNotAlone, will aim to reassure those affected by domestic abuse that support services remain available during this difficult time.

It will encourage members of the general public to show their solidarity and support for those who may be suffering, by sharing government digital content or a photo of a heart on their palm, and asking others to do the same, to show victims that they are not alone and to convey to perpetrators that domestic abuse is unacceptable in any circumstances.

The campaign will be publicising support available including the freephone, 24 hour National Domestic Abuse Helpline number – 0808 2000 247 – run by Refuge, and www.nationaldahelpline.org.uk.

From next week, adverts raising awareness of where people can seek help will run across social media and materials will be made available to a wide range of partners including charities and supermarkets.

Additionally, the Home Secretary announced that the Home Office is working with charities and the Domestic Abuse Commissioner to provide an additional £2 million to immediately bolster domestic abuse helplines and online support. 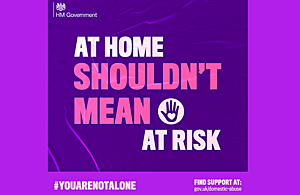 This information is for Men aged 65 and over. It is to help you decide if you want to get screened for abdominal aortic aneurysm (AAA).

An AAA is formed when the main blood vessels in the body weakens and starts to expand. As they expand, large AAA's can burst. This is a medical emergency that is fatal in around 80 out of every 100 cases.

Men aged 65 and over are most at risk. The NHS AAA screening programme invites men in England for screening during the year they turn 65. Men over 65 can contact the programme to arrange to be screened.

Screening is a choice. There are 2 options for men aged 65 and over. You can: Attend screening or declined screening.

All screening involves a balance of benefits and risks.  Would you want to now if you had an abdominal aortic aneurysm?

Would you be willing to have major surgery if screening showed that you had a large abdominal aortic aneurysm that could be repaired.

Find out more information at www.nhs.uk/aaa